I used my Urban Decay Rewards to get a discount on the Liquid Moondust Eyeshadow and I’m glad I did! This stuff is liquid glitter!

A little side note too. As soon as the temps get back over 30 degrees Im going back outside for my photos for better lighting. Right now it’s a -5 wind chill an I think my liquid glitter would freeze solid!

I had a hard time choosing between Magnetic and Recharged but finally went with Recharged because it has a nice two-tone of coral an gold. It is definitely iridescent. 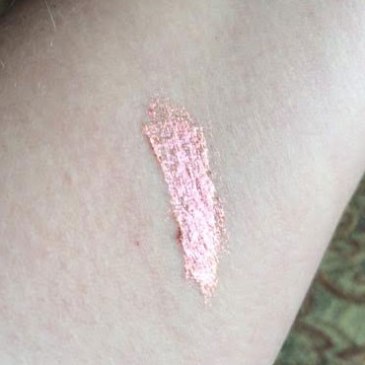 The applicator is a tiny brush and it’s fairly easy to apply. However you have to remember that it is liquid glitter so it goes on a little different than powder. It takes each application about 20-30 second to dry and I use my finger to smudge it a little.

This product is buildable so you can add more than one coat for an even more glittery look. I am wearing two coats in the photo below and fee like this is a casual enough look for every day wear. It’s very pretty! I’m feeling very Rock Starish at the moment.

I did use the Urban Decay Eyeshadow Primer Potion as a base and I’m wearing the Too Faced Better Than Sex Waterproof Mascara.

I also feel like you could use this product as a highlighter. The glitter is super fine and it’s easy to blend with your finger.

Overall I’m super impressed with the Liquid Moondust and now I really want the purple shade! I do wish Urban Decay would come out with a mini set that included all 8 shades. Hint! Hint! for Christmas 2017.